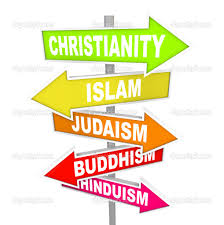 Religion is one of the cornerstones of civilization. Historically, religion had a significant impact on shaping our world. Currently, religion continues to greatly influence the world around us. As the global community continues to shrink and become more interdependent, it is extremely important for people to become more aware of one another’s spiritual heritage. Increased knowledge of one another’s religious beliefs, fosters tolerance and understanding which is critical for global peace and understanding.

THE TASK AND THE PROCESS

Your task is to research five major religions.  In your research, you should be concentrating on the modern day aspects of the religion.
Religion

Major Religions of the World

The Major Religions of the World

Major Religions of the World
CONCLUSION

By studying the origins, traditions, customs and beliefs of the world’s five major religions, we will have a better understanding of the civilizations that developed in various regions of the world.  Religion has helped shape and forms the world we live in.  By taking a close and personal look into religions with which we are not familiar, we will gain an insight into how the world has evolved into the place we live in today and maybe we can begin to develop a tolerance for people who have different beliefs