WEBQUEST! - The Five Themes of Geography: A Webquest

1.) First, we're going to visit an unlikely place for surfers: North Carolina. Click the link below and click through the entire slide show. Make sure to look at the pictures and read the text!

THEN, make the connection to each of the five themes of geography:
(Write your answers on your worksheet!)

a.) Absolute Location: Find the Outer Banks on a map (in a book or on-line). You have to be able to point to them if asked!
b.) Relative location: If someone wanted to go surfing there, how would you describe how to get there?
c.) Describe this place. What is it like? (Include the natural environment and the human culture.)
d.) What region is it in? Is it in a region that you typically think of when you think of surfing? Where is another surfing region?
e.) Human/environment interaction: How are humans using the land? How is the land affecting humans?
f.) Movement: How are people, things, or ideas moving?


2.)  Next choose one of the three articles linked below. (You can skim each of them before you choose!)  :)

After Irene, Vermont Kids Travel Across a Mountain to Get to School


Read your article from start to finish. Then, decide which of the Five Themes is most important in your article. (You have to choose ONE!) Describe where in the article you saw the theme and why you think it is the most important or prominent.)


3.) Finally, visit the following sites and look at the images/photographs in each one. List as many themes as you can for each image. Before giving you the sites, I'll give you an example: 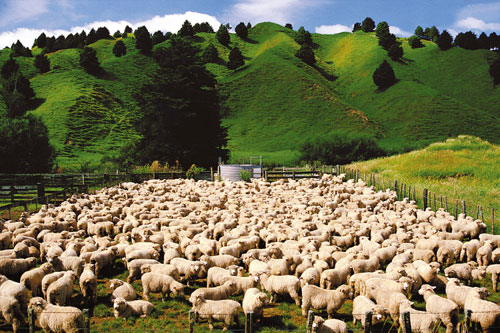 If this were the image I was working with, I would think about the ways that the Five Themes might show up in the picture.
For example:
Location: The absolute location isn't given in the image, but the pasture is lower in elevation than the surrounding hills (relative location).

Place: This place is rural. There are some trees, but it looks like it's been deforested due to grazing. The grazing animals are sheep, and there are a lot of sheep for a small area.

Region: We don't know much about the region in the photograph, except that it is a region where there is a good deal of agriculture and livestock. It is also a region that gets some rain, given how green the landscape is.

Human/Environment Interaction: I would guess that the land would look different if the sheep weren't there. It would probably have more forests. And yet the landscape is well-suited for sheep. The farm was probably located there because it's a good place for sheep farming.

Movement: The sheep need to move around the landscape to graze. Their wool also needs to be moved to other regions to be sold. Also, it's possible that the farmers learned about sheep farming elsewhere, and then moved their knowledge to this place.


Choose THREE of the following images (Each is the FIRST central image you see when you open the link!) :
NOTE: You DON'T have to read the article. Just look at the central photograph!

Remember: List as many themes as you can for each image--and describe why you think each is present!

If you want, you can choose any photograph you want from the internet (as long as it's appropriate for school!) and do the same thing as you did with the three images in the previous section!

If you choose to do this extension, you must Cut and Paste the photograph you are discussing on answer sheet.